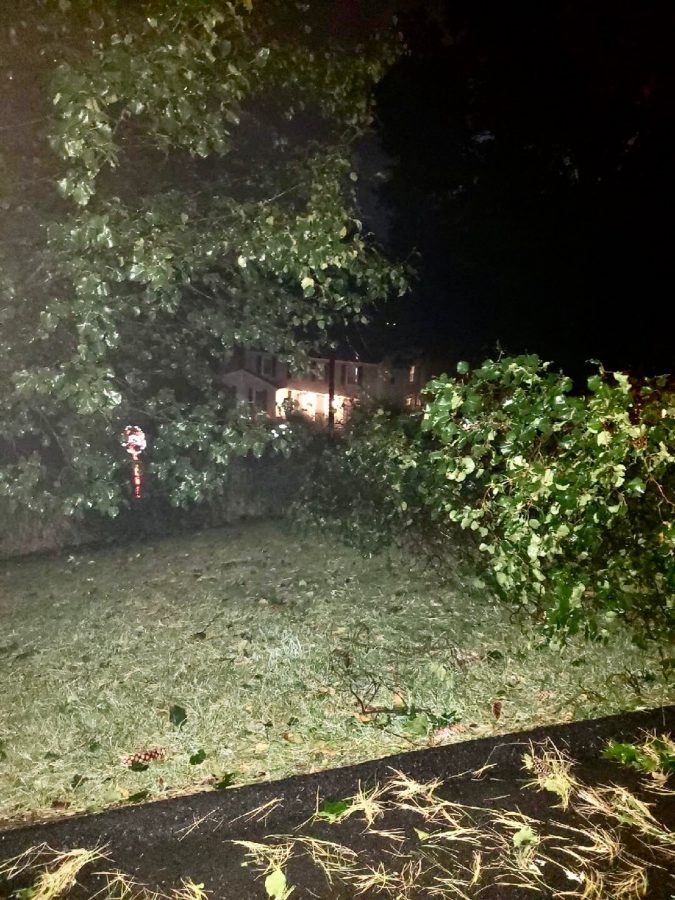 While nearly every Upper St. Clair high school student and their family were aware of the occurrence of Homecoming on the night of September 28th, very few were expecting the severe thunderstorm that ravaged the district that same night. Throughout the evening and into the night, there were not only heavy rains, thunder, and lightning, but hail at times as well. Most of Upper St. Clair lost power, and a number of community members’ homes suffered damage.

One high school student shared his experience relating to tree collapse on his family’s property: “We lost two [trees] in the front, three in the back. In the past few days, we’ve been trying to move them down to the curb and get everything dragged down so it can get collected.” Overall, the process of breaking down the trees as well as removing them was quite a hassle, and it was especially difficult because of the surprise nature of the storm.

While the storm was mainly an issue for homeowners because of the possibility of properties’ being damaged, students also had to adapt to the possibility of the storm interfering with Homecoming plans. A sophomore at Upper St. Clair described her difficulties in trying to circumvent the storm whilst traveling to the dance: “Me and my group, we were at the Country Club, we were eating dinner, [….] and half of my group was going into one car, they had already left, and so my mom was coming to get us, and I came out, and all the doors were open, and it was raining sideways.” Students had to not only attempt to coordinate pictures and dinner around the storm, but also make an effort to arrive at the school without becoming caught in the chaos of the unpredictable weather.

Because of the dangerous conditions the night of September 28th, traffic was also an issue. Numerous students recounted their struggles regarding their travels to Homecoming, and how the majority of individuals on the road were driving extremely cautiously, and therefore slowly, because of the storm. In fact, one student described a part of her journey in which the weather truly took a frightening turn: “And then it starts hailing, and the hail is like golf-ball sized, and it was hitting the windshield. It was making such a loud sound, [….] we thought it was going to break the windshield.” The tricky weather definitely added an interesting component to the traveling aspect of the dance.

Although the weather was undoubtedly unpredictable the night of Homecoming, the dance was still a success. The turnout was quite large, as per usual, and the overall reviews of the dance were positive. In addition, construction teams, tree removal services, and power companies worked to repair the damage caused by the storm almost immediately following its conclusion. While the conditions may not have been ideal the night of September 28th, it is clear that it would take more than just a storm to disband the close-knit community of Upper St. Clair.